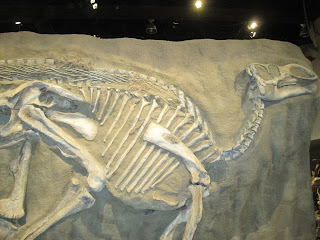 I visited Drumheller (Alberta, Canada) last month to see the fossil of dinosaurs at Royal Tyrell Museum. I am attaching some of the pictures. Most of the fossils were bones of different parts (of the dinosaurs), different species and different times. The bones that I saw were hard to believe that they are actually "bones". Mainly because we are used to see bones, which are white or yellowish or brownish at some extent. During that visit, I could not distinguish between an EGG and a ROCK kept side by side and I identified incorrectly (unbelievable ehh...?).
Believe me they (the bones) look like rocks.....hard solid rocks. My post starts now. 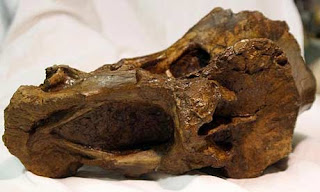 All of us know, life was not like this 200 millions years ago. What about the earth and life on earth before that? How was it? I do not know and no one is SURE about the answer. Basic elements that constitutes life are mainly Carbon, Oxygen, Hydrogen. (Of course many elements like nitrogen, calcium, phosphorous etc etc.. also are vital part of life on earth.. I think all of you will agree that the way these elements make bonds now, were different long back ago. Let us think of an alternative to this system of carbon-hydrogen based life.

I remember a line in Sriramcharitmanas by Tulsidaas, a well known and one of the most popular Hindu script, which reads... छिति जल पावक गगन समीरा, पंच रचित अति अधम शरीरा। it means our body is made up of SOIL, WATER, FIRE, SKY AND AIR. In simple words, it is said in Hindu mythology that our body is made up of soil. This is also interpreted as follows. after death our body is disposed and it goes into these above-said five components. Sometimes I wander whether it gives us some more information other than this. Is it possible to have a life with soil? There is no answer to this but there are hints from the mother nature to decode. Silicon and silicates are main constituent of soil and is in abundance in the nature on earth. Can we imagine a life system with silicon and its derivatives as the basic unit instead of carbon and its derivatives as we see it in present.

Keeping all these questions in mind I started searching what our scientific knowledge says about this. While searching, I saw a literature by Prof. E. REYNOLDS published in NATURE in year 1893. That paper is about looking at silicon analogues of carbon compound. Periodic table is of help for this kind of comparison. I am writing some of the matter from that paper because I think it is important. "..Carbon, whether combined with hydrogen, oxygen or nitrogen or with all three, is the great element of organic nature, while silicon, in union with oxygen and various metals, not only forms about one-third of the solid crust of the earth, but is unquestionably the most important element of inorganic nature....." he further writes.. "....The chief functions of carbon are those which are performed at comparatively low temperatures;hence carbon is essentially the element of the present epoch. on the other hand, the activities of silicon are most marked at very high temperatures;hence it is the element whose chief work in nature was performed in the distant past, when the temperature of this earth was far beyond that at which the carbon compounds of organic life could exist......."

Silicon's ability to make stable bonds with elements like nitrogen, hydrogen and oxygen indicates the possibility of a silicon based life possibly in other atmosphere other than oxygen (as it is now). Other possible atmosphere could be SULFUR. I suggest sulfur because it shows properties similar to oxygen due to their presence in the same group (group 16). Also sulfur is related to silicon in period third in the same way as oxygen is related to carbon in the second period. Apart from this silicon is capable of making long chains, multiple bonds and good bond strength with oxygen. Moreover, silicon also has an edge over carbon because of its solubility in aluminum. as it is said "silicon dissolves freely in aluminum". In a way Aluminum resembles nitrogen in directly forming bond with silicon at higher temperatures (here the comparison is between Si-Al and C-N). Si-Al dissolution and ability to stay together with ease and stability can be understood in terms of there coexistence in the crust of earth which has been named with them as SIAL (refer to the other part of crust called "Sima", consisting of silicates and magnesium).

Before saying final words for this post, I would like to make two points about the importance of silicon (and its derivatives) in our life. First, a complex derivative of silicon made up of Silicon, oxygen, hydrogen and carbon is used in many medical application including cosmetic implants. This material is called "polymerized siloxene" or more commonly known as "silicone". This material shows know side effects in our body if implanted in our body. Secondly, recent research shows the importance of SILICON in our nutrition for strong and healthy bones (Journal of Nutrition and health aging, Vol 11, page 99 (2007)).

Finally, Its time to think on the possibility of a life with silicon, aluminum and oxygen as basic building blocks instead of carbon, nitrogen and hydrogen. Life in terms of this silicon and group can be thought to be present in past on earth or may be the world outside our reach.  Science gave the answer about our evolution, courtesy Charles Darwin. But it reminds me of a statement by George Bernard Shaw.

Posted by Rajesh Kumar 'Nachiketa' at 3:07 AM

hmmm...I remember this discussion...and I also remember that I was totally against it that time...
But this time, its really sounds interesting..specially due to the new facts you have provided.
There is one query...
There are some life forms with natural habitat as the region around really hot sulfur sources (volcanic plates..or perhaps some volcanic eruptions) deep down the sea water. Sulfur is one of the main elements for their life cycle, but still carbon is the base of their structure, in spite of very high temperatures. This is what I knew watching some program in NGO (I might have missed some points). I would like to have your opinion about it.

@ Bandhu:
Yes I also remember the discussion just before you left for Lisbon in 2009! You said it correctly, The basic unit of life near volcanoes and high temperature region is carbon. You can see it in terms of different "bond enthalpies" values for bonds formed by carbon with different other elements. The bonds formed by Carbon have higher enthalpy values than the same bond with silicon. I am not talking about same bonds with silicon. I am talking about different elements altogether as basis. now the basis is CARBON, HYDROGEN AND NITROGEN and the alternative is SILICON, OXYGEN AND ALUMINUM.

NOTE:C-O bond has higher enthalpy than Si-O bond but C-O or O-C-O is gas but Si-O2 is solid. Silicon-Al is very stable. Recall ASBESTOS which has no direct involvement of CARBON but is known for its highest resistance against heat. I know I am not answering any queries but I am just thinking and asking help in thinking towards this....

I loved the post. I kind of followed the argument with respect to likeness of elements and chemical possibilities. Even though I would love to know the physical environment under which that is all possible.

What also creeps up my mind is this; in a scenario such as you imagine what are possibilities of life forms. Would the absence of carbon still allow it? Which is what you began your argument with.

As for alternative pictures of life and the world I think at almost every 1000 years or so ( before man began to dominate the world) each evolutionary possibility would have taken the world to very different world from what is present.

Like someone famously said: If you kill all insects of the world the man would be extinct in 50 years. If you remove man from the equation all life forms would flourish in 50 years.

Even though I didn't particularly like the movie 'Avatar' nonetheless I kind of liked the world of 'Pandora'. Where almost all life forms had a certain amount of intelligence and awareness. It was imaginative picture of an alternative world and I would have been more impressed if the animals did not resemble derivatives of animals of the our planet. But a fantastic, organic and lovely living environment.

Just a clarification on my last comment: When I say evolutionary possibilities I mean not just in the biological (Darwin) sense but in also in terms of chemical and physical (environment) possibilities. Like what if the asteroid had not come and destroyed the dinosaurs and changed the course of evolution.

Also how did life begin? Under what physical and chemical circumstances? I understand this to be one of the biggest puzzles facing science. I only hope we have the answer to that in my lifetime. Unlikely though.

As Reynold(author of the paper that I cited in the post)says "....it is not probable that direct evidence would yet be obtainable----this must be work for the future....". I think presently that "future" has come, which he was referring to. I did not get any evidence for real existence of such living creature in literature.
I agree with your comment on co-existence of different creature in nature. If an animal is not able modify itself to the changing environment, atmosphere, climate then it will disappear.

I think analogies are sometimes good to understand things. I am not sure but Darwin also might have think in terms of the similarities amongst different animals. I remember a picture from my old biology book which said that at very initial stage of the growth of an animal in womb all of them look similar.

it will really be most adventurous to know about natures birth mystery in my life-time.